In this article, you will get all the information regarding Population Welfare Department Lahore Jobs 2023 For Male & Females Latest

The appointment of government jobs will be made on a daily wages basis as per the recruitment policy of the Government of Punjab. So for Lahore Domiciled, it is a great opportunity to avail it. Now, I will tell you about the rest of the details.

Population Welfare Department of Lahore is working under the Govt of Punjab which is working for to aware the peoples about the planning and family growth affairs and the development of births and its control are the prime and main objective of this department. As, far as the vacancies are included which have been advertised includes from Graduation to Matric and those of low level like Middle, Primary and literate applicants are also invited to apply.

Matric / Middle qualification with relevant experience and 18 to 30 years of age is required to apply.

How to Apply for Population Welfare Department Lahore Jobs: 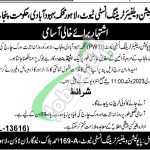