In this article, you will get all the information regarding Tokyo’s spicy cod roe ice cream: An unexpected dessert that tastes about like what you’d expect 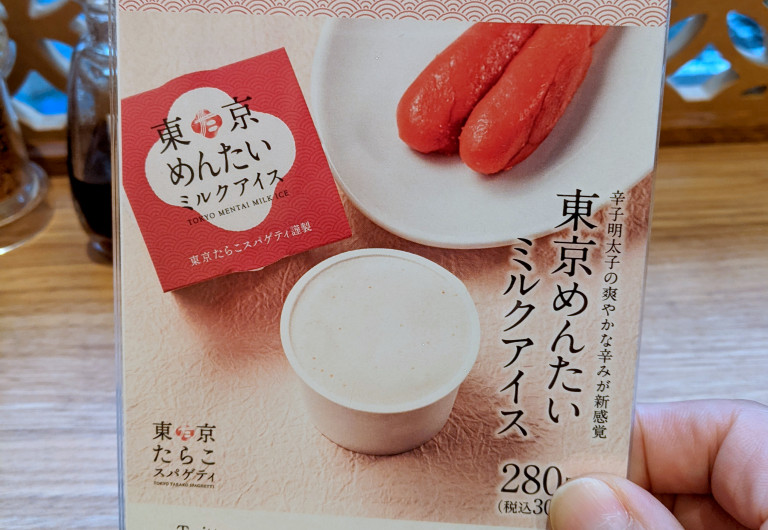 Mixing spicy fish eggs and sweet ice cream is a bold choice, but is it a wise one?

Our Japanese-language reporter Mr. Sato has about as big a sweet tooth as anyone. If it’s sweet, he’ll eat it, and probably love it, no matter what it is. He’s especially fond of ice cream and will accept any flavor, even bizarre ones like natto coffee.

In addition to ice cream, Mr. Sato is also a big fan of tarako spaghetti, a pasta dish topped with cod roe. As it so happens, there’s a chain restaurant specializing in tarako spaghetti called, appropriately, Tokyo Tarako Spaghetti, and they also sell an interesting flavor of ice cream that Mr. Sato had never tried before: spicy cod roe!

Mr. Sato has always known about Tokyo Tarako Spaghetti but had never had the chance to try the restaurant for himself, since every time he went to the Shibuya branch, there was always a line out the door that made him give up. However, he recently learned that the Ikebekuro restaurant usually isn’t as crowded, so he decided to head over there for lunch one day. To his delight, when he arrived at 11 a.m., when the restaurant opens, he was able to get in easily.

“So this is Tokyo Tarako Spaghetti!” he mused as he was seated with a menu. It was definitely a specialty restaurant; the menu was full of tarako pasta dishes. Mr. Sato had no idea that you could make this many different kinds.

He ended up ordering the limited-time-only “4 Types of Tarako and Dashi Spaghetti” (1,290 yen [US$8.67]) as a “spaghetti teishoku set”, which comes with two side dishes and a salad for an additional 200 yen.

The noodles were topped with clumps raw, grilled, and stewed tarako , and a bit of konbu kelp.

The grilled tarako looked delicious! When Mr. Sato took a bite, he was surprised to find that, together with the loose roe, it had a super fun popping texture that he couldn’t get enough of. “Ah, how I love fish roe!” he sighed.

Mr. Sato wondered if he should bite off a chunk of the raw tarako too, but in the end, decided to be civil and break it up so he could mix it with the spaghetti. Suppressing the urge to chomp into it, he instead scattered it into pieces over his noodles.

Then he poured the broth over everything to make it nice and soupy.

It was ready to eat! Mr. Sato scooped some up with his chopsticks–since this dish is Japanese-style and meant to be eaten that way–and took a big bite.

He nearly fainted from the pleasure of it. He adored the texture of the different kinds of cod roe. “Tarako, you never disappoint!” he moaned. While marveling at the infinite possibilities of combining tarako and spaghetti, Mr. Sato cleaned his plate.

For dessert, Mr. Sato ordered “Tokyo Mentai Milk Ice Cream”. With a base of milk ice cream mixed with spicy cod roe, it was the only suitable finish for his present “Cod roe or bust!” mentality, though it required some courage to follow through with.

When it arrived, it didn’t really look like mentaiko ice cream, but little red bits were scattered throughout the creamy white base which had to be the spicy cod roe. When Mr. Sato ate a spoonful, the rich flavor of milk ice cream filled his mouth, and then, as an accent…the prickly spicy taste of mentaiko arrived!

As sweet as the ice cream was, the spiciness came on in spades. For Mr. Sato, this wasn’t a good thing. In fact, he actually felt that it had been a mistake to try to combine mentaiko and ice cream. The flavors clashed against each other; even sandwiched between the provided wafer shells, the sweet and spicy aromas could not harmonize and continued to fight for dominance.

In short, it really wasn’t Mr. Sato’s thing, but Tokyo Tarako Spaghetti does offer a great overall experience for the tarako spaghetti enthusiast. At the very least, it opened his eyes to new possibilities in combining cod roe with pasta. If you’re a fan of this uniquely Japanese pasta dish, definitely go check out Tokyo Tarako Spaghetti, and don’t forget to try Goemon, too, which Mr. Sato also recently (and belatedly) discovered!

Tokyo’s spicy cod roe ice cream: An unexpected dessert that tastes about like what you’d expect